Skip to content
Home2019November
Douglas Griffin (pictured) gave an enjoyable talk that was well attended by a wide range of ages and abilities. 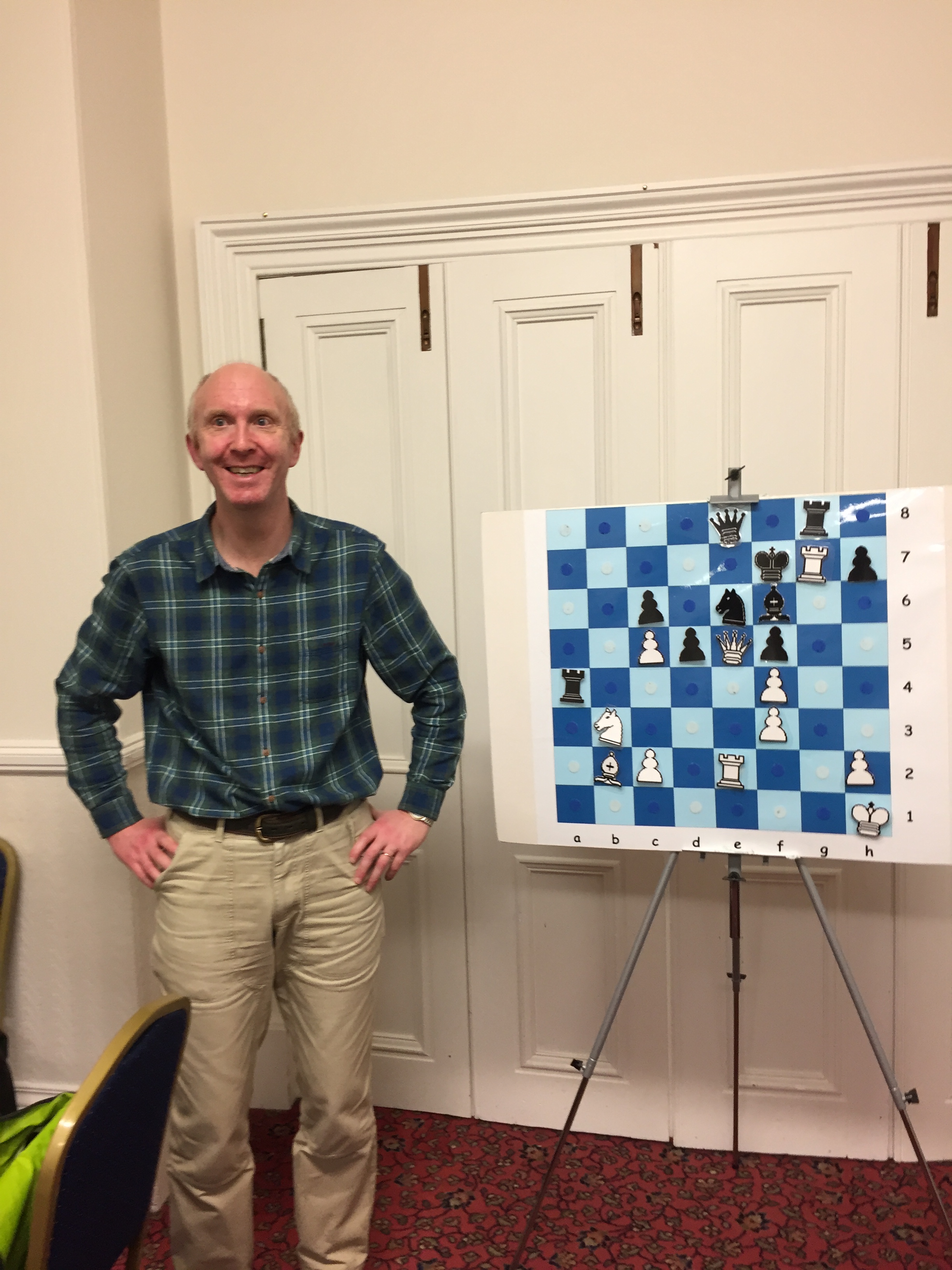 First there was  Levenfish’s life story in a potted nutshell, from his birth at the end of the 19th century through to his triumphs and travails living in the Soviet Union (multiple-time Soviet champion, but struggling with living in a totalitarian state and surviving both wars).
Then four interesting games from various stages of Levenfish’s career were discussed.
Firstly the following game against Smyslov in one of the several “Smyslov variations” of the Grunfeld :
https://www.chessgames.com/perl/chessgame?gid=1090796
Beating anyone in “their” variation is quite an achievement but crushing Smyslov in the Grunfeld in your 60s (and only a few years after Smyslov’s title bouts with Botvinnik) takes some doing. 21.Rc3 is a really charming move. Later on the threat of 31.Nf3 forcing the queen on h1 to retreat (ending black’s counterplay)  is an impressive detail to see in advance as Levenfish no doubt had.
At this stage in the talk the chocolate biscuits were opened (thank you Jeremy) and then the primary school kids were banished to the other room. They had behaved impeccably but there is a limit to attention span at that age!
Then Douglas showed an impressive game against Kan (not in the Kan variation sadly!):
https://www.chessgames.com/perl/chessgame?gid=1090618
Kan played an overly passive line and the early play was dominated by preventing the c5 pawn break (which would free the b7 bishop and liquidate black’s weak c6 pawn). 16.Nd2! was highlighted by Douglas as a particularly interesting moment in this phase.
Even more impressive was the calculation that Levenfish must have done for his 36th move – finding his 42nd move in advance is a real feat and this was by no means the end of the calculation. Levenfish makes the point in his book several times that quiet moves like this are a difficult thing to calculate in advance and this was the second quiet move in that particular branch of calculation!
The audience was still hungry for more chess and Douglas was impressively fast at getting through the games so we looked at a further two games.
The following game illustrates Levenfish’s strong nerves as he had just been squashed by Botvinnik in game one of their match. There had been doubts over whether Levenfish  was just a paper champion who only won the Soviet Championship that year because of Botvinnik’s absence and the critics were in danger of being proved right. Not so after this game :
https://www.chessgames.com/perl/chessgame?gid=1031922
g5 by Levenfish was very bold and the numerous forks in the finale (especially including some of the variations not played) make the game quite a spectacle.
Finally this crush of Yudovich (see picture at top)  who played a line that is no longer played often – for good reason it seems:
https://www.chessgames.com/perl/chessgame?gid=1090596
Douglas had a train to catch but first he managed to sell a few copies of his book and had time to autograph them before dashing off just in time!
If you are still looking for a copy then they are available from quality chess at:
http://www.qualitychess.co.uk/products/2/355/soviet_outcast_by_grigory_levenfish/
I (Hamish) am about a quarter of the  way through my first read of it and only got the book 10pm yesterday – very enjoyable so far with tonnes of diagrams that make it a relatively easy book to read without a board.

The pairings of the second round of the Bon Accord club championship are as follows:

Rules and time controls are displayed on the noticeboard. If you have any problems contact the tournament controller.

All games should be played on Wednesday 4 December 2019.

The absolute deadline for the round is Friday 20 December 2019.

The results of round 1 of the Bon Accord Club Championship were as follows:

Quality chess is soon to release a chess autobiography of former Soviet Champion Grigory Levenfish (see http://www.qualitychess.co.uk/products/1/355/soviet_outcast_by_grigory_levenfish/ ). This has never been published in English before.

The translator, Douglas Griffin, is local to the North East and has kindly offered to give a talk at Bon Accord Chess Club on the book this Friday 29th November. For more background see https://dgriffinchess.files.wordpress.com/2017/01/levenfish-botvinnik-13th-match-game-leningrad-1937-1.pdf and the excerpt at the first link.

This is an exciting opportunity to learn about a very strong chess player who tied a match with World Champion Mikhail Botvinnik but is not as well known as he should be because he was not allowed to play much outside the Soviet Union for political reasons.

Non members are very welcome to attend as well.

There will be a limited number of copies available for sale at a price of £26.50 with a fraction going to the club coffers